We advocate for children who’ve been abused or neglected by empowering community volunteers to speak up for them in the foster care system. Ensuring that every child grows up in a safe, nurturing and permanent home. 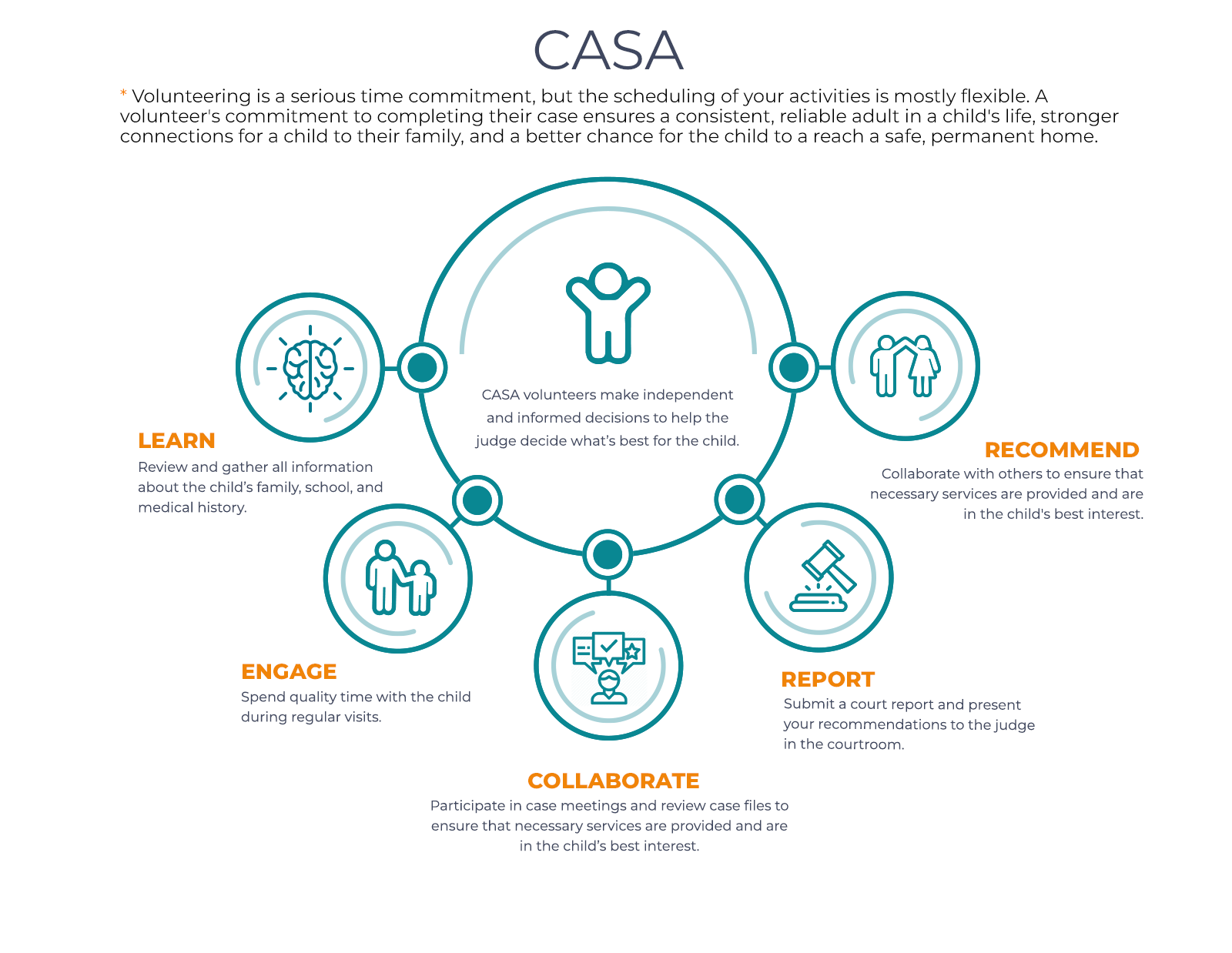 We advocate for the best interest of abused and neglected children…

Becoming a CASA will give you the tools to speak up for a child who’s been abused or neglected.
Imagine the experience of children who are removed from their homes because the people responsible for protecting them have not. These children find themselves in a world filled with social workers, lawyers, judges and courtrooms where life-altering decisions are made on their behalf.

A CASA is a court appointed, trained and committed adult who ensures that each child’s individual needs remain a priority in an over-burdened child welfare system. They get to know the child while also gathering information from the child’s family, teachers, doctors, caregivers and anyone else involved in the child’s life in order to make independent and informed recommendations to help the judge decide what’s best for the child.
If you are looking for a meaningful and enriching volunteer opportunity in Bernalillo County and want to do something about child abuse, becoming a CASA is right for you.

There are over 900 children in our county that still need an advocate.

Children served by New Mexico Kids Matter come from your community–they live in our neighborhoods, play on our teams, attend our churches. There are hundreds of these children in our county. Children who have done nothing wrong but were let down by someone they should have been able to count on to protect them. It is a violation of the most basic of trust.

Who helps this child rebuild trust? The CASA.

The CASA is assigned one child (or sibling group) and becomes that child’s voice in the system. The CASA is unique–working in the system without being from the system. In this volunteer role, the CASA visits the child(ren) regularly and also talks to the parents, teachers, caseworkers, doctors, and therapists to learn all perspectives and share an unbiased view of the child’s situation with the judge. CASAs help kids through the system safely, quickly, and more effectively. Children with a CASA do better in school and are more likely to find a safe, permanent home.

All too often, the CASA is the only constant adult in the child’s life during a frightening, uncertain time of seemingly endless changes. Few volunteer roles have such a critical and immediate impact on the life of a child, as that of a CASA.

In 1976, Superior Court Judge David Soukup of Seattle, WA, saw a recurring problem in his courtroom:

In criminal and civil cases, even though there were always many different points of view, you walked out of the courthouse at the end of the day and you said, “I’ve done my best; I can live with this decision,” he explains. But when you’re involved with a child and you’re trying to decide what to do to facilitate that child’s growth into a mature and happy adult, you don’t feel like you have sufficient information to allow you to make the right decision. You wonder, “Do I really know everything I should? Have I really been told all of the different things? Is this really right?”

To ensure he was getting all the facts and the long-term welfare of each child was being represented, Judge Soukup came up with an idea that would change America’s judicial procedure and the lives of over a million children.

He obtained funding to recruit and train community volunteers to step into courtrooms on behalf of the children: Court Appointed Special Advocate (CASA) volunteers. Implemented in Seattle in 1977, the program provided 110 trained CASA volunteers for 498 children in that first year.
National recognition and grants resulted in the replication of the Seattle CASA program in courts across the country. Today the National CASA Association represents 955 CASA programs across the country, including Washington, DC and the U.S. Virgin Islands.

In Albuquerque, since 1985, CASA has provided advocates for children and over 1,200 community members just like you have advocated for over 10,000 children. In 2012 the CASA program went from court run to a non-profit organization. We remain committed to children by providing trained advocates to speak up for them in court, in school, and in our community.

Of the children whose cases we helped close last year, 77% ended up reunited with family or living permanently with relatives, and 85% were in permanent homes.

In Albuquerque, since 1985, CASA has provided advocates for children and over 1,200 community members just like you have advocated for over 10,000 children. In 2012 the CASA program went from court run to a non-profit organization. We remain committed to children by providing trained advocates to speak up for them in court, in school, and in our community.

CASA is not your typical volunteer role.